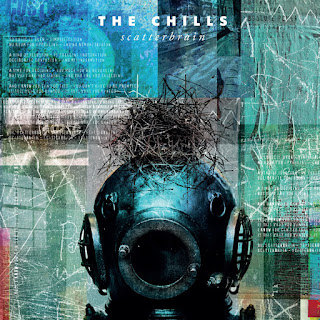 Since returning in 2015, Martin Phillipps and the Chills released two albums (Silver Bullets and Snow Bound) that not only reestablished the long-running band's place in the indie pop scene, but added some extra polish to their already-glittering legacy. 2021's Scatterbrain stays true to the big pop sound of their previous two albums while adding a little bit of prog rock-inspired trickery and some mystical lyrical concerns. From the opening track, the jumpy, synth-heavy rocker "Monolith," it's clear that Phillipps and the band are delivering another strong album. The room-filling drums, rumbling bass, swelling synths, and jangling guitars combine with Phillipps' vocals -- which are as strong as ever -- to create a sound that rocks pretty hard while still feeling nimble and light. The rest of the record takes a winding path sonically while allowing Phillipps space to meditate on aliens, magic, disappointment, and the slippery nature of time. More than many Chills records, there's some sonic diversity at play. "Hourglass" travels gently from introspective acoustic guitar backing to angular synths and comforting strings; "Caught in My Eye" balances stately piano with glitchy electronics and clomping drum machines; "You're Immortal" adds Morricone-esque horns and backing vocals to an arena-sized track that sounds like prime major-label Chills, and the title track is filled with ping-ponging electronics, howling guitars, and Phillipps' seething vocal delivery. Along with these sonically challenging tracks there are also a couple of knockout pop songs that make you remember that this is the guy who wrote "Heavenly Pop Hit." The rambling "Walls Beyond Abandon" is one; the wonderfully hooky "Little Alien" is the other. He also wrote a truly lovely anthem for the troubled times the album was created in with the sweet ode to staying home, "Safe and Sound." Overall, this wide range of styles makes for one of the most surprising and listenable albums they've done yet. It's dramatic, it's grand, and it proves yet again that Martin Phillipps hasn't lost a step and will hopefully go on for a long time making records as good as Scatterbrain.
жсждмз
on agosto 02, 2021