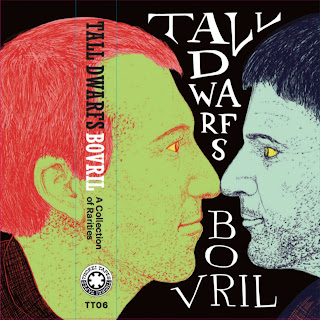 Officially sanctioned by the Tall Dwarf-men Alec Bathgate and Chris Knox this tape-only release gets together in one convenient place (if you have cassette player) rarities, oddities, live material, solo outings (more recent Knox with the Rackets on Gagarin, Bathgate on the unreleased Crushed Velvet) and more. It draws from such diverse sources as the Marc Bolan tribute album Great Jewish Music (Ride a White Swan), the Enemy live at the Windsor Castle (with the raw 1978) and Flying Nun compilations (Under the Influence, God Save the Clean, Abbasalutely) which have long been unavailable. There are also 10 International Tall Dwarfs tracks from recordings in the Helen Young Studio of Radio NZ with the likes of Scott Mannion, Stefan Neville, Sam Hamilton and Kingsley Melhuish. It is excellent (tip of the hat to recording engineer Andre Upston who has the best ears in the business) because the session was funny, casual but professional, and clever. And the Dwarfs songs were reinvented as more downbeat for "a general audience" to reveal their musical essence and craftsmanship. They became so much more musically approachable than many preconceptions of TDwarfs might allow. Closer to alt.folk than alt.rock. Get this, even though you might have to buy a cassette player or dust off the bottom-drawer Walkman. 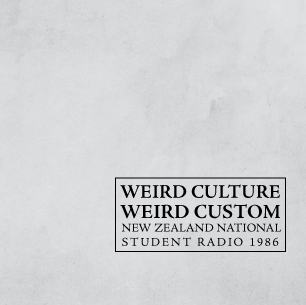 WCWC was the first of the compilation lps put out by the fledgling 'National Student Radio' group in 1987. This was an attempt by the managers of the university radio stations through NZ to get some new and exciting acts before the public and also to raise the profile for student radio. So each station ran a competition , and the two most popular acts from each town got money to record a couple of tracks for the LP. In Christchurch for example it was All Fall Down and the Jean-Paul Sartre Experience - who at that point had recorded only a demo tape ( released to student radio in a can) ..the JPS effort was later repeated on their first album, as they thought the WCWC effort was substandard. ... SO the acts were recorded, the record pressed, and sold through retail outlets. This is a vinyl rip.

Weird Culture — Weird Custom (1986) was the first record release co-ordinated by the entire New Zealand student radio network. There were twelve tracks on the album, two chosen by each of the six member stations.  Radio Active selected the two  to represent Wellington: cow-punk combo the Crawbilly Creeps with “A Day in Lucky Gulch” and feminist-folkies Putty in Her Hands gave us “NZ Music” which became an instant favorite and was oft-requested for a long time afterwards. Putty in Her Hands were a duo consisting of Charlotte Yates and Christine Jeffs. Yates continues to write and record, continuing to release solo records and also putting together the acclaimed compilations of NZ poetry set to music, Baxter (2000),  Tuwhare (2008) and Ihimaera (2011). After the only official Putty in Her Hands release (trick of the Light in 1987) Jeffs took a different turn and became a filmmaker. Her first feature film, Rain in 2001, received tremendous acclaim and led to the Hollywood financed pictures Sylvia (2003) and Sunshine Cleaning (2008). Other notables on Weird Culture — Weird Custom were Jean-Paul Sartre Experience with the very poppy “Let That Good Thing Grow” but my favorite track (other than Putty) was “Happy” by 3 Leaning Men from Palmerston North, a band which featured Alan Gregg who later joined The Mutton Birds. According to Wikipedia, “Another member of the group, Rhys Bevan, moved to the South Island of New Zealand and began a career as a baker.” 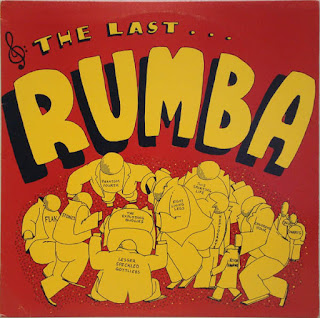 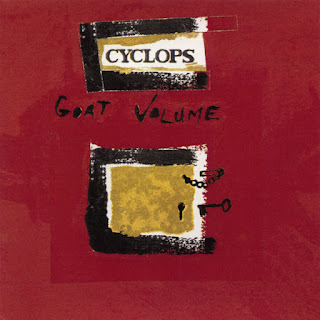 A short lived super group who features the likes of Peter Jefferies and others who released a string of singles and this which is their only full length album. This band has quite an interesting sound for those who are interested in the XPressway scene. 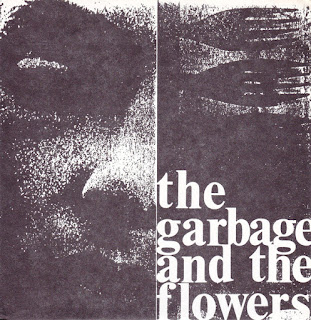 I thought I'd offer one of my favorite New Zealand singles as a peace offering. The Garbage and the Flowers released this cacophonous gem of a 7" in 1992 on the Twisted Village imprint; the band has continued to record, and if you're enticed by the sounds here, a 1997 collection of their material entitled 'Eyes Rind as if Beggars' can be found on the Allegory of Allergies blog. Dusted aptly described the Garbage and the Flowers' sound as "raw gobbets of gray matter, filthy drone, and vintage ennui," and while I think that the band's lo-fi charms begin to wear in the long-player format, this is a near-perfect realization of harsh, dissonant beauty; Helen Johnstone's strong vocals, alternatively defiant and wearied, are the real draw here, anchoring the recordings as they threaten to spiral out of control and collapse in their frenzied rush. The propulsive, feedback-drenched "Catnip" and its counterpart, the austere, resigned "Carousel," offer a bleak vision of modern humanity that is inescapable in its hypnotizing lull. 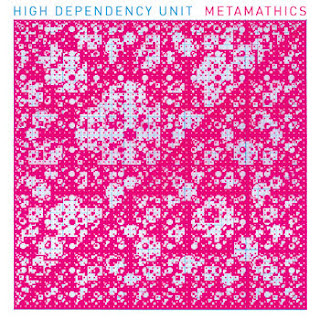 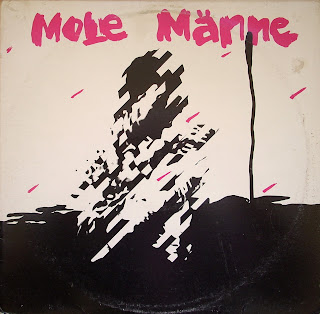 Can't really find out much about this album, so I'll just have to tell you what I reckon. Recorded in 1983 for Jayrem, Mole Männe's self-titled EP is caught somewhere between punk and post-punk: linear monotone vocals, minimalist superfuzz licking, big rumbling stereo-separated Gang of Four/PIL drumming, and "production values"; paired with teen-angst poetics.  It's dreary and adolescent, and feels like small-town-rock-band to me, and that's a recommendation. 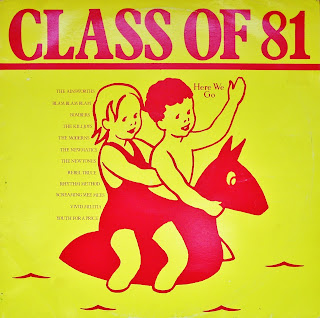 Simon Grigg put this out on Propeller, and over on his site he gives heaps of info on this comp, the neglected little brother of his massive AK79. This copy has a small amount of surface noise, but there's a bit of popping particularly on the the first three tracks of side two. The Class Of 81 is a collection of the vast numbers of new and unrecorded bands around New Zealand, and Auckland in particular, at the end of 1980. The bands themselves were inspired by the anyone-can-do it attitude that the punk and post punk global revolution had encouraged. By the end of 1980 there were hundreds of young bands playing gigs all over the country, and, in particular, every garage on Auckland's North Shore seemed to be home to an aspiring bunch of pop stars. The album as such held together fairly well, partially because there was a definite generic New Zealand sound developing, a sound not a long way removed from what, a few years later, became known as the Flying Nun sound. There was an angular quirky feel, almost jangly, to much of this. But unlike the Nun sound, the Auckland bands had a slightly more dubby, a looser & funkier feel. The album, despite plans and a steady stream of requests over the years, has never made it to CD. Regardless of that, Class Of 81 has attained a rather legendary status now as an album that clearly defined its era in New Zealand, and in particular, Auckland, Rock & Roll. For fans of The Chills, The Clash, and The Cure. 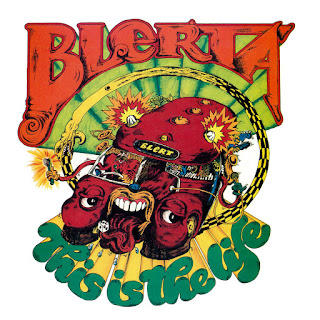 A crucial chapter in NZ's alternative lifestyle, music, film, and visual and performing arts histories, the legend of Blerta's four years on Earth (and probably other planets) possibly outweighs their actual recorded output. Others have written plenty about the significant influence of the troupe, including Roger Booth's excellent Bruno Lawrence bio, and a Radio New Zealand audio documentary. The cover art -- and the image of muddy hippies that the Blerta story conjures up -- has little to do with their sophisticated, finely-honed music. I expected fuzz guitar, sloppy lyrics about peace, and possibly bongos. Their debut album is jazzy, silly, bawdy, and above all well-crafted. Side one really captures the theatrical side of the touring band, with suggestive story-songs for the grown-ups (no "Dance All Around The World" here), and Beaver's joyful ballad "This Is The Life." Side two starts with the short Bruno-sung "Superman", then another ballad, then quickly moves on to nearly 20 minutes of tight pop-psych-jazz instrumentals. Essential. 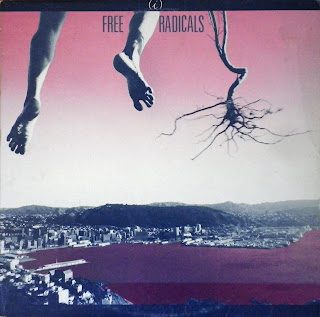 1987's mini-album (i) opens with what sounds like a pitch-shifted John Cousins marrying Eraserhead's Henry with Cabaret Voltaire as the wedding band. Second track 'don't ask' feels like Seventeen Seconds-era The Cure had been listening to My Life in the Bush of Ghosts, while first side closer 'my lips are moving' is a sort of lime and limpid green Fripp & Eno outtake. It's altogether a tighter and more rhythmic side than the second, upon whose black expanse the opaque, capacious 'Red Shift' sits, effing with the fabric of time. 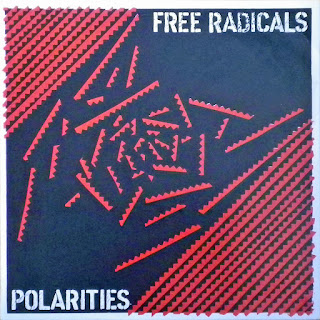 I'm a sucker for anything with 'Victoria University Electronic Music Studio' listed in the credits, from Mammal's discreet use of white noise wind effects to the most academic electroacoustic music. The first of these two LPs -- from collaborators composer Jonathan Besser, former Victoria University lecturer and composer Ross Harris, and Gerry Meister -- advertises precisely that, and recorded all in one day. The eponymous track from 1983's Polarities opens the album with synthesiser and delayed and double-tracked flute, a characteristic combination from Harris's electroacoustic whakapapa (e.g., Inner Worlds' 'Fluchtig'). Midway through the track, primitive drum machine, distorted vocals, bass and electric guitar, and a much more organ-y synth, take the improvising Free Radicals into eighties Tangerine Dream territory, though perhaps with more unfettered zeal than their cold kraut contemporaries. Elsewhere they channel Laurie Anderson's 'From the Air' (on 'Space Music'), Vangelis's soundtrack work ('Summer Rain') and David Borden's Mother Mallard ('Water Music'), though all in an unbuttoned, breezy style. 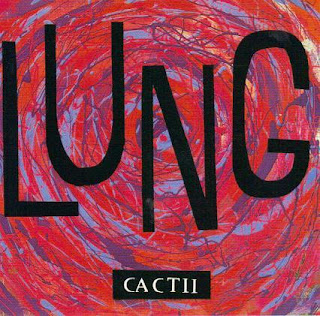 The aggressive New Zealand noise band Lung began their existence as the Palmerston North-based unit the Clear. Comprised of vocalist/guitarist Dave White, bassist Phil Williscroft, and drummer Brent Gammill, they attracted favorable notice with their 1990 self-released effort Live Stomach, changing their name to Lung in the wake of the record's release; in late 1991 the trio returned with the ferocious Cactii, issued like its predecessor on their own Yellow Bike label. A world tour followed, and while in Germany they recorded the 1993 EP Paralysis; other tracks from the session appeared later that year on the full-length 3 Heads on a Plate, the final Lung release to feature Williscroft, who was subsequently replaced by former Rake bassist Graeme Galyer. While touring America in 1994, the group began to splinter, hanging together long enough to record the live LP Feeding Fucking Vera, a document of a blistering club date in Muncie, IN; days later, Lung officially disbanded when White returned to New Zealand, leaving Gammill and Galyer in the U.S. White and Yellow Bike label partner Claire Pannell later resurfaced in C.U.N.T. (Claire's Un-Natural Twin). 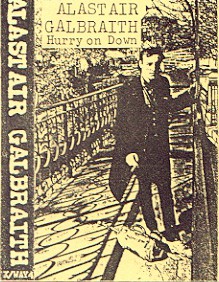 First up was the "solo" Hurry On Down cassette made of live recordings and a bunch of studio material differing based on which of the two versions of the cassette you happen to hear. A lot of this material has been reprised on later releases and while I must admit to not being one of the lucky few who heard this particular cassette (don't ask why, it's a long story) all reports say the music herein is as beautiful and powerful as anything Galbraith was to later release.